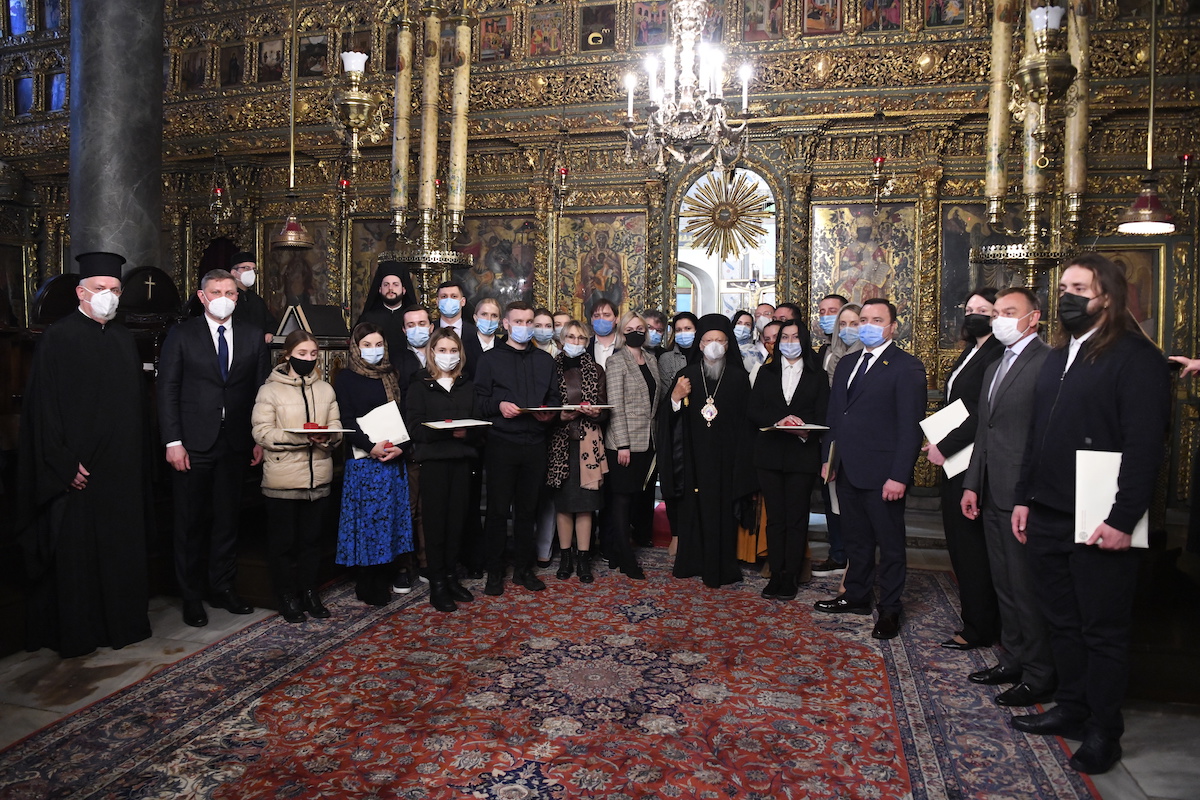 While welcoming at the Phanar a group of members of the Ukrainian Parliament and their associates on 6 March 2021, His All-Holiness the Ecumenical Patriarch Bartholomew expressed his belief that “the unity of Orthodoxy is in no way being tested as a consequence of the Ecumenical Patriarchate’s response to the request of the Ukrainian people” for the granting of autocephaly.

Greeting them in the patriarchal church immediately after the Vespers service, His All-Holiness warmly welcomed the members of the Ukrainian delegation, accompanied by the Consul General of Ukraine in Istanbul, Mr. Oleksandr Gaman, and reminded that the concern of the Mother Church of Constantinople for the ecclesiastical life of the Ukrainian people has been timeless.

“The granting of Autocephaly to the Orthodox Church of Ukraine in 2019 was first and foremost a tender expression of pastoral concern for spiritual justice and freedom. For decades, if not centuries, Ukraine was not able to enjoy complete ecclesiastical independence from external influences. Until recently, most of the Ukrainian people were outside of the Orthodox Church. This was a sorrowful reality for the Body of Christ, because the ecclesiastical division in your country was a deep wound in the communion of the entire Orthodox Church. Recall the words of St. Paul the Apostle: ‘if one member suffers, all suffer together’ (1 Cor 12:26).”

His All-Holiness noted that with the decision of the Holy and Sacred Synod of the Ecumenical Patriarchate, in October 2018, to accept the appeals of Philaret and Makariy, the way was opened for the unification Synod (Sobor), which took place in the historic church of Saint Sophia in Kyiv, on 15 December 2018.

“The Mother Church of the Ukrainian people gladly responded to the numerous petitions of Presidents, civil authorities, even the Rada of your country, to grant the Tomos of Autocephaly.  And let us not forget that similar requests for “complete canonical independence,” namely the Autocephaly of the Orthodox Church of Ukraine, were addressed by the Ukrainian Hierarchy to the late Patriarch of Moscow, Alexis II, back in November 1991, despite the fact that these requests were not canonically submitted to the Patriarchate of Moscow, since only the Ecumenical Patriarchate has the right and the responsibility to grant Autocephaly, in accordance with the Eastern Orthodox canonical tradition and practice.”

“The Ecumenical Patriarchate has always hastened to assist and support the various local Orthodox Churches whenever they face challenges. There is no freedom in division, because freedom can only be lived in unity. This unity of Orthodoxy is in no way being tested as a consequence of the Ecumenical Patriarchate’s response to the request of the Ukrainian people. The Tomos of Autocephaly was an act of responsibility on the part of the Mother Church towards millions of our Orthodox brothers and sisters who were outside the Church. And, of course, this was not an act dictated by external forces or geopolitical interests. Two years later, with great satisfaction we see the new Church growing under the inspiring and stable leadership of our Brother, His Beatitude, Metropolitan Epiphany of Kyiv.”

“Whoever threatens to break Eucharistic Communion with the Ecumenical Patriarchate is threatening to be cut himself off from the trunk of the tree of the Orthodox Church. As far as we are concerned, we cannot allow Orthodox Ecclesiology to be distorted with novel theories driven purely by base motives and secular ambitions. The word of Truth is ‘sharper than any knife’ (cf. Heb. 4:12)”

The Ecumenical Patriarch then stressed that the granting of autocephaly to the Orthodox Church of Ukraine should be evaluated, beyond certain personalities and beyond the narrow national interests, as a genuine spiritual healing.

“Today, the Orthodox people in Ukraine are in good canonical standing and they partake of the common Cup. Now, if some cannot accept this reality, they should ask themselves who precisely is breaking the unity in the Orthodox Church.”

Concluding, His All-Holiness bestowed his paternal wishes and patriarchal blessing to the members of the Ukrainian delegation, as well as to the entire pious Ukrainian people, expressing once again his joy for his forthcoming visit to Ukraine. For this reason, he expressed his gratitude to the President Mr. Volodymyr Zelensky, and to the Prime Minister Mr. Denys Shmyhal, for the kind invitation extended to him to visit their country on the occasion of this year’s 30th anniversary of its proclamation as an independent and sovereign state.

On behalf of the Ukrainian delegation, Mr. Bohdan Yaremenko thanked His All-Holiness for the warm words and pointed out the importance of the forthcoming Patriarchal visit to Ukraine. Mr. Yaremenko delivered letters to the Ecumenical Patriarch from President Zelenskyy as well as from His Beatitude Metropolitan Epiphany of Kiev and All Ukraine. He also offered him an icon of the Virgin in Ukrainian style as a gift, while the Patriarch reciprocated with books and other souvenirs.Then, at the suggestion of His All-Holiness, the Ukrainian Delegation was greeted by His Eminence Metropolitan Elder Emmanuel of Chalcedon who referred to the many years of efforts of the Mother Church to restore the unity of the Orthodox people of Ukraine, until the historic unification Synod (Sobor), in Kiev in 2018, which he presided. The Metropolitan Elder of Chalcedon pointed out, among other things, that the Ukrainian people had been waiting for many years for the decision of the Ecumenical Patriarchate and expressed their optimism for the future of the new Church, urging everyone to remain united in it, under the leadership of His Beatitude Metropolitan Epiphany.