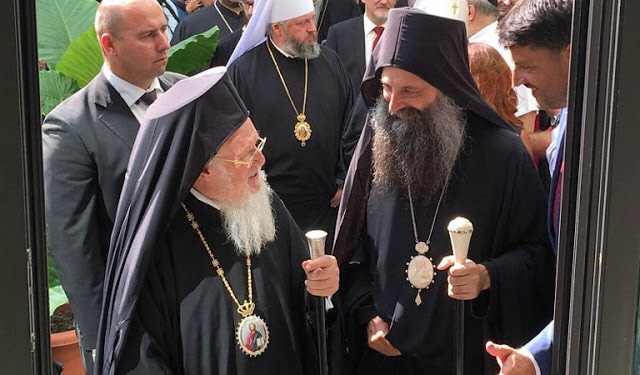 On 18 February 2021, His Eminence Metropolitan Porfirije of Zagreb-Ljubljana was elected as the new Patriarch of the Orthodox Church of Serbia, in the Cathedral of Saint Sava in Belgrade. His All-Holiness Ecumenical Patriarch Bartholomew sent a congratulatory letter to the newly-elected Patriarch of Serbia in which he stated that “the votes came before God and through the election, He whispered affectionately to the ears of the holy clergy and the valuable people of the Church of Serbia.” He stressed that “a brother was added to the successors of our Holy Father Sava, Archbishop of Serbia, who had been ordained and granted autocephaly by our predecessor, [Patriarch] Manuel [of Constantinople] in Nicaea.” “Today you are welcomed with joy, responsibility, toil, agony, and struggle by Christ for the sake of every soul of Orthodox Christians within your local Church,” he added.

The Ecumenical Patriarch wished that the patriarchal ministry of the newly elected patriarch “to be long, auspicious and renewed by the Holy Spirit and by the Lord”, underlining that “an important prerequisite and solid foundation of your patriarchal ministry is your devotion to the Divine and Holy Canons and to the Church, which continues to exist by our Scriptures and our works. If you follow this path, you will surely have succeeded in God’s work.” “The Mother Church of Constantinople, from which your local Church was born, congratulates and rejoices in your election. We express to you our undivided love and respect, our dear brother in Christ,” concluded the Ecumenical Patriarch who also had a phone conversation with the newly elected Patriarch of Serbia on that day.

World Council of Churches acting general secretary Rev. Prof. Dr Ioan Sauca also sent a congratulation letter to Patriarch Porfirije of Serbia. “The election of Your Holiness is an encouragement for the entire Orthodox family and beyond,” wrote Sauca in his letter of congratulations. “Your work for reconciliation among Christians and your contribution to the pacification of the Balkans over the past years is a source of inspiration and builds now on the legacy of your worthy predecessor, Patriarch Irinej, who promoted a culture of peace among peoples and nations.”