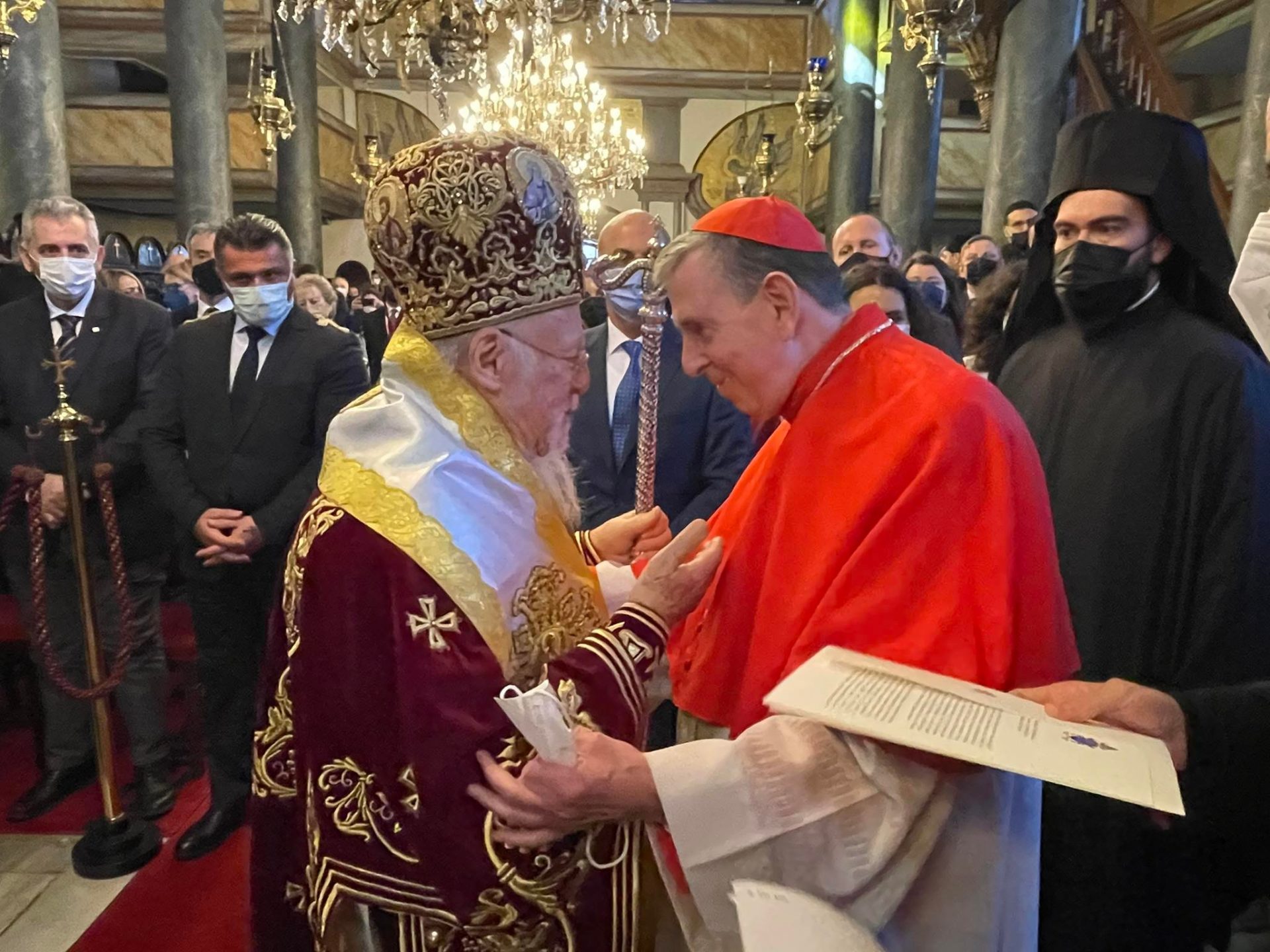 The Ecumenical Patriarchate honored the memory of its founder, the Holy Apostle Andrew the First-Called. On Tuesday 30 November 2021, a solemn Divine Liturgy was presided by His All-Holiness Ecumenical Patriarch Bartholomew in concelebration with their Eminences the Senior Metropolitans Emmanuel of Chalcedon and Dimitrios of the Princes Islands, and the Metropolitans Nektarios of Anthedon (Representative of the Patriarchate of Jerusalem), Vasilios of Constantia and Ammochostos (representing the Church of Cyprus), Meliton of Philadelphia, Seraphim of Sevasteia, Irinaios of Myriophytos and Peristasis, Chrysostomos of Myra, Naum of Rousse (Church of Bulgaria) and Amphilochios of Adrianople in the Patriarchal Church of St. George, at the Phanar. With them concelebrated as well the Rev. Prof. Dr Ioan Sauca, acting general secretary of the World Council of Churches (from the Church of Romania). The homily was preached by His Eminence Metropolitan Kyrillos of Rhodes.

Were also present their Eminences the Senior Metropolitan Apostolos of Derka, Metropolitans Panteleimon of Bryoula, Dimitrios of Metra and Athyra, Theolyptos of Iconium, Eugene of Rethymnon and Aulopotamos, Polycarpos of Italy, Stephanos of Kallioupolis and Madytos, Elpidophoros of America, Joseph of Buenos Aires, Athenagoras of Kydonia, Maximos of Selybria, Gerasimos of Petras and Cheronissos, Kyrillos of Hierapytna and Siteia, Andreas of Saranta Ekklisies, Ioakim of Proussa and Job of Telmessos, and their Graces the Bishops Tikhon of Tiberioupolis (Church of Bulgaria), Adrianos of Alikarnassos, Benjamin of Tralles, Irinaios of Eumeneia and Smaragdos of Daphnousia.

The Divine Liturgy was attended by the official delegation of the Church of Rome, headed by His Eminence Cardinal Kurt Koch, President of the Pontifical Council for Promoting Christian Unity, as well as by the Undersecretary of State for Foreign Affairs of Greece Mr. Andreas Katsaniotis, representing the Greek Government together with his honorable entourage, the Deputy Minister of Education and Religions of Greece Mr. Zetta Makri, the Ambassadors of Greece and Ukraine to Ankara, Mr. Michael-Christos Diamesis and Vasyl Bodnar, the Consul General in the City Mrs. Georgia Sultanopoulou, together with her husband the Ambassador of Greece in London Mr. Ioannis Raptakis, the Consuls General of Bulgaria and Ukraine in the City Mr. Vassil Valchev and Roman Nedilskyi, members of the Greek Delegation to the Interparliamentary Assembly of Orthodoxy, the Mayors of Athens and Thessaloniki, Mr. Costas Bakogiannis and Mr. Konstantinos Zervas, as well as many faithful from the City, Greece and other countries.

Your Eminence, Kurt Cardinal Koch, President of the Pontifical Council for Promoting Christian Unity, and members of the official Delegation of our Sister Church of Elder Rome,

Filled with sentiments of love and honor, we greet and welcome you here at the festive Phanar, as you honorably bear the festal wishes of His Holiness Pope Francis. We entreat Your beloved Eminence to convey to His Holiness our brother the wholehearted thanks of the Church of Constantinople and our Modesty for graciously sending your Delegation and for the participation of the Church of Rome in the events of our Thronal Feast.

The pandemic of the coronavirus has variously impacted our ecclesiastical life and inter-Christian dialogues. It is now almost two consecutive years that the objectives of the Mixed International Commission of Theological Dialogue between the Roman Catholic and Orthodox Churches have been unable to be realized through person-to-person encounters. We hope that this will occur next May 2022 and that the convening of the Commission’s plenary will also return to its course. What is certain is that the current topic of the Dialogue – “Primacy and Conciliarity during the second millennium and today” – pertains to the nature, structure and function of the Church and to its unity and catholicity. We are especially pleased with all the initiatives of Pope Francis concerning the importance of the proper function of conciliarity. Indeed, even on this matter, the Dialogue between the Church of Rome and the Orthodox Church has proved a productive venue of profound theological knowledge and mutual ecclesiological enrichment. We are convinced that this Dialogue of love and truth nurtures and strengthens the spirit of dialogue more broadly and facilitates the encounter of our Churches with the contemporary world.

We regard it as an immense blessing that with our brother Francis we share a common sensitivity and approach for the vast contemporary challenges. Our Christian witness in the world is advanced by our personal meetings as well as our joint declarations and initiatives before burning global issues such as climate change, the refugee problem, the preservation of human rights, the social inequality, the protection of childhood, the confrontation of religious fundamentalism and other matters. We strive for the promotion of a culture of solidarity and fraternity, knowing that the very life of the Church is a great revolution in the field of human relations, the protection of the sanctity and beauty of the human person as well as revelation of its eternal destiny in Christ.

We all know that the Church of Christ lives in a world that is very different to that of other periods; and in this world, the Church is obliged to proclaim the Gospel of the Grace that has come through Christ and will come through the Kingdom of the Father, Son and Holy Spirit, a world that the Church cannot reject and cannot identify itself with. The Church represents and expresses all that humankind cannot provide for itself: namely, the transcendent dimension of its existence, which no cultural development and scientific progress covers or eliminates. The adaptation of the Church to the spirit of the present age deprives the former of the capacity to serve this transcendent and spiritual nature of humankind. In this sense, as the late Fr. Georges Florovsky rightly emphasizes, “the Word of God cannot be easily adjusted or accommodated to the fleeting customs and attitudes of any particular age, including our own time. Unfortunately, we are often inclined to measure the Word of God by our own stature, instead of checking our mind by the stature of Christ.” What is clear is that neither secularization nor introversion and isolation in the Church constitute the proper experience and application of its nature as being “in the world” but not “of the world.”

With these thoughts and sentiments, we greet your presence at the venerable See of the Ecumenical Patriarchate. We communicate our sincere gratitude to our brother Pope Francis for his kind words on our completion of 30 years since we were elected to the Throne of Andrew, the First-Called of the Apostles,” along with our fervent wishes for his forthcoming 85th birthday. Finally, we pray that He who is glorified in His Apostles Andrew and Peter, who imitated and participated in the Lord’s Passion and founded our Churches, may grant you unfailing health and every blessing from above for the continuation of your noble ministry in the Church, and we close with special honor and deep love in the Lord.

Following the address of the Ecumenical Patriarch, Cardinal Kurt Koch responded by reading the following message of Pope Francis of Rome:

To His All Holiness Bartholomew, Archbishop of Constantinople, Ecumenical Patriarch

On the occasion of the feast of the Apostle Andrew, the first-called and brother of the Apostle Peter, and patron saint of the Church of Constantinople and the Ecumenical Patriarchate, my thoughts turn to you, beloved brother in Christ, and to the Church that our Lord Jesus, “the great shepherd of the sheep” (Heb 13:20), has entrusted to your ministry. I do so, not only in view of our own fraternal friendship but also of the ancient and profound bond of faith and charity between the Church of Rome and the Church of Constantinople. With the assurance of my spiritual closeness, I have sent a delegation to convey my good wishes for joy and peace to you, your brother Bishops, and the clergy, monks and lay faithful gathered in the Patriarchal Church of Saint George for the Divine Liturgy in memory of the Apostle Andrew.

It was a source of joy for me that during your recent visit to Rome we were able not only to share our concerns regarding the present and future of our world but also to express our shared commitment to addressing issues of crucial significance for our whole human family, including the care of creation, the education of future generations, dialogue among the different religious traditions and the pursuit of peace. In this way, we as Pastors, together with our Churches, strengthen the profound bond that already unites us, since our common responsibility in the face of current challenges flows from our shared faith in God the Father Almighty, Creator of heaven and earth; in the one Lord Jesus Christ, his Son, who became man for our salvation, died and rose from the dead; and in the Holy Spirit, Lord and giver of life, who harmonizes differences without abolishing them. United in this faith, let us seek with determination to make visible our communion. While recognizing that there remain theological and ecclesiological questions at the heart of the work of our ongoing theological dialogue, it is my hope that Catholics and Orthodox may increasingly work together in those areas in which it is not only possible, but indeed imperative that we do so.

Beloved brother in Christ, along the path towards full communion between our Churches, we are sustained by the intercession of the holy brothers Peter and Andrew, our patron saints. The full unity for which we yearn is, of course, a gift from God, through the grace of the Holy Spirit. May our Lord help us to be ready to embrace this gift through prayer, interior conversion and openness to seeking and offering pardon.

With these heartfelt sentiments, I renew my warm good wishes for the feast of Saint Andrew, and exchange with Your All Holiness an embrace of peace.