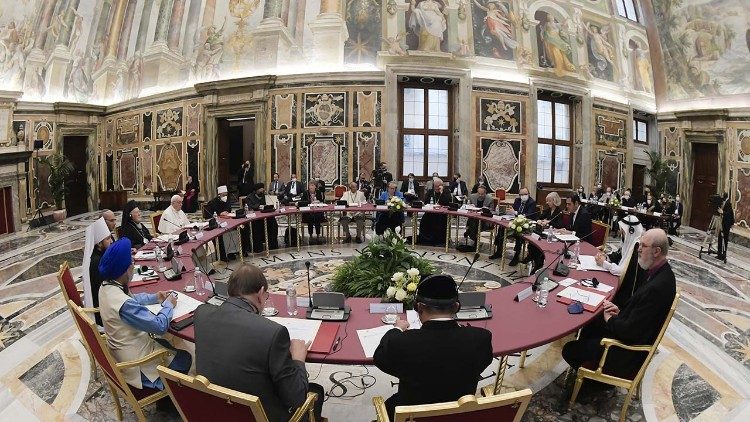 His All-Holiness Ecumenical Patriarch Bartholomew together with His Holiness Pope Francis participated on 5 October 2021 in a round table meeting in the Clementine Hall of the Vatican on the role of Religion in the world, regarding the Education Teachers’ Day. The Patriarch and the Pope addressed the representatives of all the Churches and Religious Communities that had been invited, together with the competent representative of UNESCO.

Address of His All-Holiness Ecumenical Patriarch Bartholomew at the meeting «Religions and Education: Towards a Global Compact on Education»

Educating the younger generation is one of the most difficult challenges that societies are called to resolve. In our age, the essentially complex task of education is compounded by new difficulties associated with the signs of the times. The explosive development of science and technology, the eruption of information and the internet, globalization and the omnipotence of economic criteria, secularization, socio-political changes, multiculturalism and pluralism, the struggle for cultural identity, religious fundamentalism and so much more, create powerful shackles for this otherwise basic dimension of society and civilization. Precious traditions are shattered, human freedom is misinterpreted as “the art of avoiding limitations,” individualism and the libertarian conception of the human rights regime are spreading everywhere. Thus, preserving the humanistic orientation of education and the pedagogical character of schools are rendered increasingly difficult.The Greek classics perceive the vision of education as “the convergence of the soul” towards good (Plato, Republic 518d). Greek wisdom also determines that true education does not merely prepare us to achieve whatever we desire, but to desire that which we should – namely, that which serves virtue and truth. Indeed, education is related to what humankind ought to be rather than to what it is.

Today we are once again discovering the vital importance of education as transmission of values, which directs human beings to what is essential in life. Inasmuch as this process passes through the channel of the proper relationship between teacher and pupil, the pedagogical role of the teacher and the critical responsibility of discipleship are emphasized anew.

The genuine teacher and pupil comprise invaluable elements, which cannot be dismissed, but must be preserved as irreplaceable. A teacher that deals with the ages of childhood and adolescence – when the foundations for the orientation of values and development of character are established – is not some anonymous factor of education that conveys useful knowledge, but a pedagogue that assists the pupil to acquire a perception of the depth of reality, to prioritize his desires and ambitions, and to comprehend the value of social responsibility. Such a pedagogue always addresses the freedom of his pupils and aims at supporting their struggle to use this freedom properly. A pedagogue does not impose but exhorts; he invites and accompanies, knowing full well that freedom and responsibility require time and effort in order to take root and be cultivated. A pedagogue teaches by means of who and what he or she is – with their personality, with the radiance of their soul, with their example, and with their unconditional identification with their “sacred mission.”

Accordingly, a pedagogue shapes genuine “pupils” that recognize the endeavor and interest of their teacher so that the ideal of discipleship is registered in their conscience as a cherished legacy for their whole life. It is certain that any pedagogue that lacks this “ethos” cannot successfully implement the objective of education. “Only an idea that ‘assumes flesh’ can influence someone. An idea that remains word can only change words.” Indeed, an authentic teacher constitutes the essential cornerstone of education.

Naturally only authentic teachers can contribute to a positive confrontation of the great contemporary problems in the field of education. They will, for example, play an important role in overcoming educational problems created and continued by the coronavirus pandemic. They will raise awareness about the importance of religious education in schools for the spiritual and social upbringing of young people. And they will teach the younger generation about the function of dialogue, the spirit of inter-cultural exchange, and the value of peaceful coexistence with the other, the different.

We would like to highlight the contribution of religious education in the matter of coexistence among different cultures in contemporary societies. In this context, children and young men or women will understand that the interest in developing their personal religious identity does not comprise an impediment for communicating with others, while also constituting the basis and prerequisite for openness toward others. Only those who have and appreciate a particular identity are able to demonstrate genuine interest for the identity of others as well, and are thereby capable of communicating and collaborating with others.

The presence and proper organization of religious identity in the field of education is of crucial importance for the future of humankind. Young people must be taught about a religion:

• which stresses the spiritual identity and eternal destiny of all;
• which offers answers to the great existential questions and quest for meaning in life;
• which determines the identity of peoples and cultures; which has preserved inestimable spiritual traditions, as well as respect for creation;
• which resists trends leading to the diminishment of the sacredness of the human person;
• and which can contribute decisively to peace and reconciliation, as well as to the cultivation of a civilization of solidarity and fraternity.

In light of the fact that religion is today frequently used by fundamentalist circles as a vehicle of division and conflict, proper religious education – as an education of peace – acquires special timeliness. It prepares children and young men or women to participate in the creation of a world of peace, where human beings can see in the face of their fellow human beings a brother and sister, rather than a threat or – worse – an enemy.

The quality of the vision of a society is judged by how it evaluates and organizes the education of the younger generation, as well as by how it perceives school and the aims of education, including the role of the teacher and pupil. We congratulate the organizers of this assembly that is devoted to the inexhaustible issue of education in relation to religion. And we are grateful for the opportunity to address you.

Thank you very much for your kind attention!