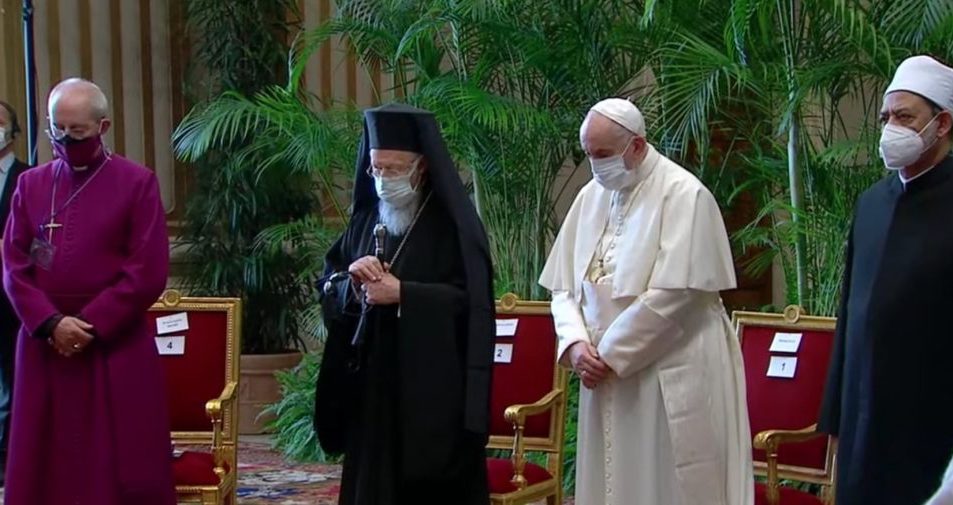 On 4 October 2021, His All-Holiness Ecumenical Patriarch Bartholomew addressed the “Faith and Science: Towards COP26” meeting at the Vatican and together with Pope Francis, Archbishop of Canterbury Justin Welby and other religious leaders he signed a joint appeal. The signing of the text was followed by brief addresses by the Pope, the Ecumenical Patriarch and the Archbishop of Canterbury, as well as representatives of the main religious communities.

His All-Holiness stressed: “We need this dialogue in order to sustain the environment, in order to coexist with one another as human beings and as part of God’s sacred human creation, and we need it in order to simple be, breath and love one another.” The Ecumenical Patriarch and the other faith leaders marked their personal commitment by pouring soil upon the roots of a young olive tree that will be planted in the Vatican gardens.

The Ecumenical Patriarch then met in person with Pope Francis and had cordial fraternal communication on issues of mutual interest. In the afternoon, His All-Holiness spoke at the “Science and Ethics for Happiness Project” meeting about world poverty. The meeting took place at the Vatican Academy of Sciences, under the scientific responsibility of Professor Jeffrey Sachs.

The joint signing of a document like this, which constitutes a heartfelt appeal to political leaders meeting in Glasgow is a powerful symbolical gesture. Precisely because it is both the outcome of dialogue and a call to continue this dialogue:

We need this dialogue in order to sustain the environment.

We need this dialogue in order to coexist with one another – as human beings, and as part of God’s sacred creation.

Thank you for being a part of this dialogue. We are certainly honored to be here among you.

It is truly an honor to be asked to be present for part of your auspicious meeting on poverty, which is part of the “Science and Ethics for Happiness Project” at the Pontifical Academy of Social Sciences in partnership with eminent institutions and foundations. Your work here is vital inasmuch as it gives flesh and bones to the theology and theory about the healing of the divisions among humankind and the wounds of our planet.

In our Patriarchal Encyclical for Christmas 2012, we declared 2013 as “Year of Global Solidarity,” with the purpose of sensitizing hearts and minds with regard to the issue of the then acute financial crisis, and especially to “the immense and extensive problem of poverty and the need to assume necessary measures to comfort the hungry and misfortunate.” We also made an appeal to every Christian and every person of good will to intensify our efforts, “as individuals and nations, for the reduction of the inhumane consequences created by the vast inequalities as well as the recognition by all people of the rights of the weakest among us in order that everyone may enjoy the essential goods necessary for human life.”

People in poverty are not a mere case study that needs to be solved, but concrete human persons, in whom Jesus Christ is present and with whom He identifies Himself, awaiting for our support and solidarity. This message lies at the core of the document “The Mission of the Church in Today’s World,” which was adopted by the Holy and Great Council of the Orthodox Church (Crete, 2016): “The Orthodox Church’s efforts to confront destitution and social injustice are an expression of her faith and the service to the Lord, Who identifies Himself with every person and especially with those in need: Inasmuch as you did it to one of the least of these my brethren, you did it to me (Mt 25:40).”

Just over a year ago, the Holy and Sacred Synod of the Ecumenical Patriarchate officially approved the work of a theological commission charged with “preparing a formal document on the social doctrine of the Orthodox Church, as this has been reflected and expressed in the tradition through the centuries and by the Ecumenical Patriarchate in contemporary practice, particularly as recently adopted in the documents and decisions of the Holy and Great Council.” The title of this document is For the Life of the World: Toward a Social Ethos of the Orthodox Church. In this document, it is highlighted that “it is impossible for the Church truly to follow Christ or to make him present to the world if it fails to place this absolute concern for the poor and disadvantaged at the very center of its moral, religious, and spiritual life (§33) … Above all, the Church can be no less concerned for the plight of the poor and the defenseless than was Christ himself, and no less ready to speak for them when their voices cannot be heard (§34).”

In the New Testament we find two wonderful texts that reveal the deeper meaning of the commandment of love and the fullness of the truth about the social mission of the Church in the world (the parable of the Good Samaritan, Lk 10:25-37; and the narrative of the Last Judgment, Mt 25:31-46). On the basis of these two Scriptural passages, we express the firm conviction that Christian love does not refer to a mere circumstantial support to the destitute, indifferent towards the roots of their suffering, but, taking into consideration the fact that today we are capable of influencing history and changing our destiny, the commandment of love invites us all to fight with all our strength in order to make this change a reality. As it has been properly written, whoever observes the commandment of love does not simply show support to one’s neighbor, but goes beyond that, fighting against the causes of this injustice and struggling for the establishment of a society, in which human dignity and freedom are respected and protected as fundamental sacred values.

Therefore, we are deeply moved that you have chosen as the focus of your discussion the Lord’s Beatitude in the Sermon on the Mount from the Gospel according to St. Matthew: “Blessed are the poor in spirit, for theirs is the kingdom of heaven.” In his gospel account, Matthew is presenting an alternative way of life. And what he tells us is that the beauty, justice and peace, for which God created and intended the world, must become part of our own life. God’s kingdom is a reversal of attitudes, a reordering of values, a conversion of behavior. God’s kingdom means becoming more and more a person who shares in the justice and peace of God.

In order to do this, St. Matthew tells us that we must become poor in spirit. Of course, the Gospel according to Matthew with this phrase does not intend to idealize poverty. Poverty in itself is not good; it is not a virtue. Poverty is actually a clear indication that the Kingdom of God has not yet come. In accordance with the Biblical hermeneutic tradition, the poor is spirit is the one who freely commends his whole life and destiny to the hands of God, the one who fully depends upon the grace of God. The poor is spirit is the definition of the faithful par excellence. The faithful is the one who implements the commandments of Christ, especially the great command of love, which encompasses all the other commandments. Such an implementation indicates Christ’s presence in the life of the faithful.  In this same spirit of the command of love, Jesus says to the rich man, who asked how he could inherit the eternal life: “Go and sell all your possessions and give them to the poor” (Mt. 19.21). The rich man’s reaction after hearing Christ’ response to “go away sorrowful” signifies that he actually lacked this blessed poverty in spirit, namely the combination of faith and love in their unbreakable unity.

This is the clear message of the Gospel. This is the clear vocation of the Church. Whoever fails to understand the truth of the poverty in spirit is unable to listen to the cry of the destitute. We witnessed the reality of this poverty in spirit over the last eighteen months with the global spread of the coronavirus, as the so much desired spirit of solidarity, which is needed not only as the proper response to the ongoing health crisis, but also to all the other challenges that humanity may encounter in the future.