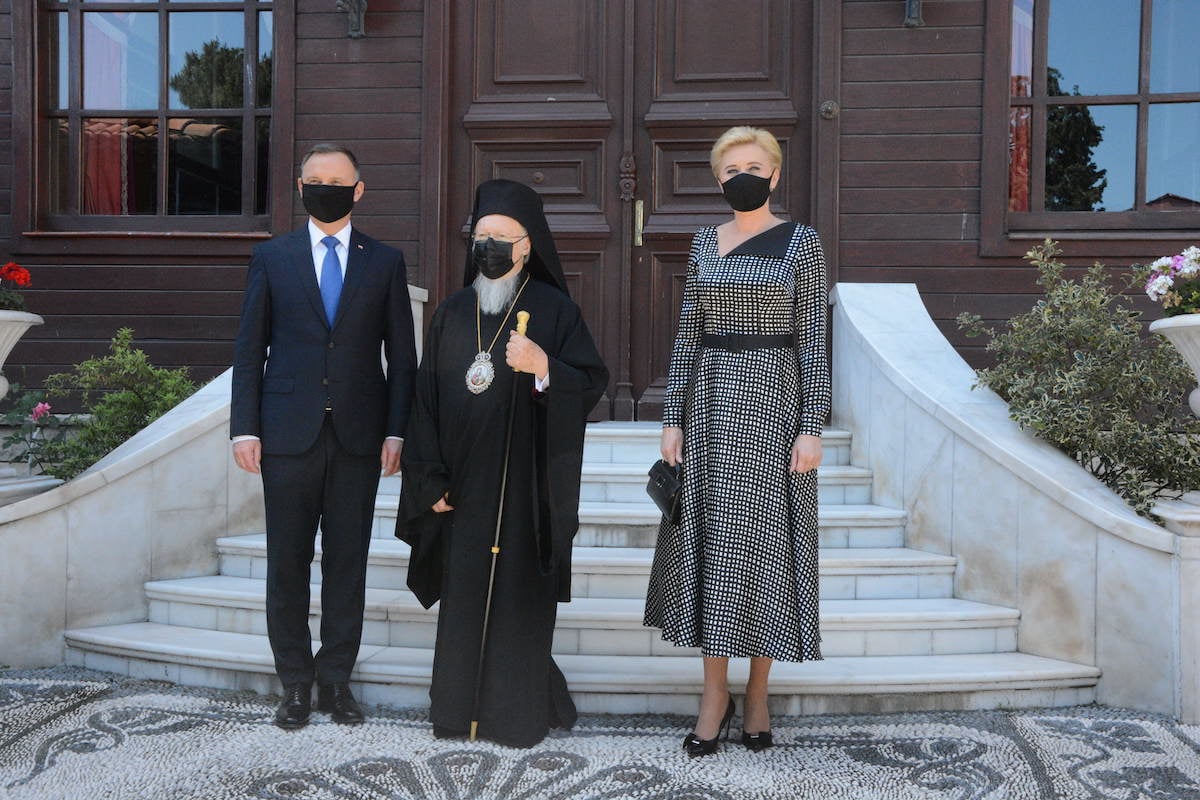 On 25 May, 2021, the President of Poland, Mr Andrzej Duda was received with great honor at the headquarters of the Ecumenical Patriarchate, at the Phanar, in Istanbul. President Duda was accompanied by the First Lady Mrs. Agata Kornhauser-Duda, Ministers and other senior officials of his country. He was welcomed by the Very Grand Protosyncellus Theodoros, accompanied by the Very Reverend Archimandrite Gregory, Chief Secretary of the Holy Synod, and the clergy of the Patriarchal Court. Afterwards, President Duda, his wife and the members of his Delegation prayed in the Patriarchal Church where they were guided by the Very Reverend Grand Ecclesiarch Aetios, Director of the Private Patriarchal Office who presented its history as well as the holy relics and icons kept in it. Special mention was made of the holy relics of Saints John Chrysostom and Gregory the Theologian, which were returned to the Ecumenical Patriarchate in 2004 by Pope John Paul II of Polish descent, who before his election in 1978, served for fifteen years as Archbishop of Krakow, the city where President Duda was born.

Afterwards, the Very Grand Protosyncellus Theodoros accompanied the distinguished delegation to the Eugenides Palace, where in the auditorium it was received and welcomed by His All-Holiness Ecumenical Patriarch Bartholomew who expressed his pleasure for the visit of the President of Poland, whom he had officially visited a few years ago in Warsaw. Their cordial special meeting was also attended by His Eminence Senior Metropolitan Emmanuel of Chalcedon, the Very Grand Protosyncellus Theodoros and the Very Reverend Archimandrite Gregory, Chief Secretary of the Holy Synod.

His All-Holiness and President Duda discussed the ministry, initiatives and actions of the Ecumenical Throne, the state of Orthodoxy in the world as well as the developments of inter-Christian dialogue. His All-Holiness referred to the important contribution of the Orthodox Church of Poland, who was granted the status of autocephaly by the Ecumenical Patriarchate in 1924, and recalled with emotion his visit to Warsaw in 2015, when, at the invitation of His Beatitude Metropolitan Savva of Warsaw and all Poland, he laid the foundation stone of the majestic church of the Divine Wisdom, which recalls the long and indestructible ties of the daughter Church of Poland with the Mother Church of Constantinople. They also had the opportunity to discuss issues of wider interest, such as the Ecumenical Throne initiatives to raise global public awareness of the need to preserve the creation and the protection of the natural environment, but also the importance of Christian values ​​and traditions in shaping of modern societies.

Afterwards, the President and the First Lady of Poland signed the Guestbook of the Patriarchate, where, in their text, they point out, among other things, the importance of interfaith dialogue, especially in the modern world, for unity and the promotion of peace. They are also proud to say that the Autocephalous Orthodox Church of Poland is an active community in their country that participates in its social life and acts by the principles and values ​​that witness the universality of Christianity. The Ecumenical Patriarch accompanied the President of Poland to the main gate of ​​the Patriarchate on his departure from the Phanar and thanked him for his honorary visit to the Center of Orthodoxy.