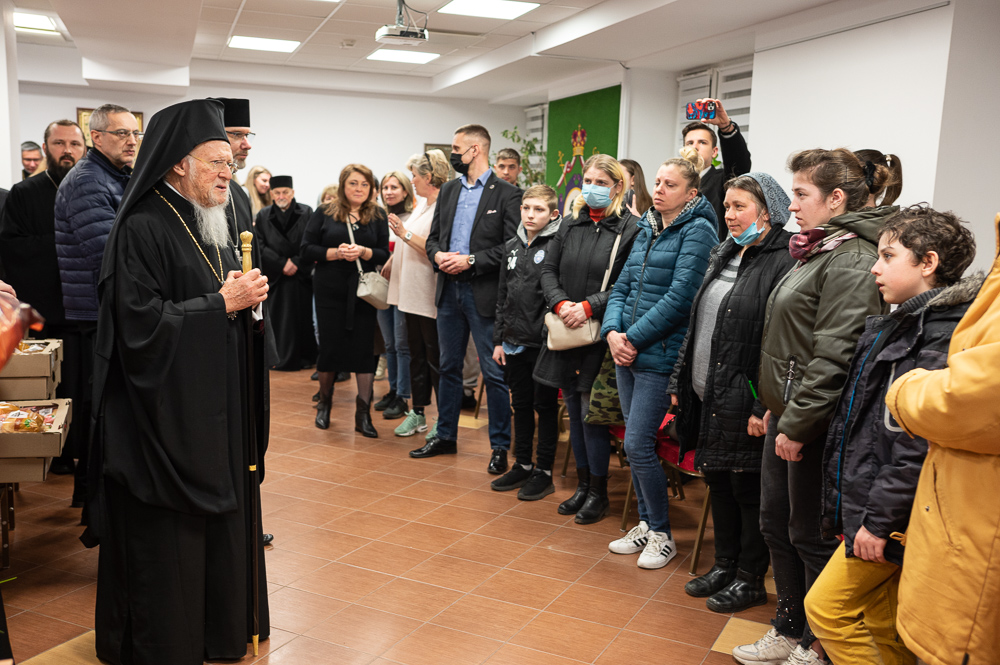 On 27 March, 2022, His All-Holiness Ecumenical Patriarch Bartholomew, accompanied by His Eminence Elder Metropolitan Emmanuel of Chalcedon and the Very Reverend Grand Syncellus Iakovos Krochak, traveled to Poland to meet Ukrainian refugees at the invitation of the President of the Republic of Poland, His Excellency Andrzej Duda, and the Primate of the Orthodox Church of Poland, His Beatitude Metropolitan Sawa of Warsaw. At the airport, His All-Holiness was met by His Beatitude Metropolitan Sawa, His Eminence Archbishop George of Wroclaw, and representatives of the Chancellery of the President of the Republic of Poland.

From the airport, the Ecumenical Patriarch went to the Orthodox Cultural Center, where he had a meeting with the clergy, faithful of the Church, refugees from Ukraine and the local Greek community for whom services are held in the chapel. After a short prayer for peace in the world and Ukraine, His Beatitude welcomed the Ecumenical Patriarch on the Polish soil. He pointed to the spiritual ties which exist between the Church of Poland and the Ecumenical Patriarchate. The Patriarch, thanking for the welcome, addressed the refugees from Ukraine with cordial words and presented them gifts of aid. A dinner followed then at the Metropolitan’s Residence during which the situation of Orthodoxy in Poland, in the world, and especially in Ukraine was addressed.

On the next day, in the morning, Ecumenical Patriarch Bartholomew visited the Church of St. John of the Ladder in Warsaw’s Wola district, where he prayed for the peace of the whole world and Ukraine and for the repose of all the dead who rest in the adjoining cemetery. His All-Holiness also prayed over the tombs of the late metropolitans George, Dionysius, Timothy, Stefan and Basil. A meeting followed in the spirit of fraternal unity in the parish house, during which information was exchanged on the challenges of the Church in the contemporary world.

In the afternoon, the Ecumenical Patriarch met the President of the Republic of Poland, His Excellency Andrzej Duda, and his wife, at the Belweder Palace.

In the evening, His All-Holiness visited the newly built Hagia Sophia church in Warsaw in the presence of bishops, clergy, representatives of other local Churches, representatives of the Chancellery of the President of the Republic of Poland, local government authorities, the diplomatic corps, faithful, refugees from Ukraine and believers of the Roman Catholic Church. His Beatitude Metropolitan Sawa thanked the Ecumenical Patriarch for his visit, while His All-Holiness expressed the joy of his stay in Poland and the fact that he had the opportunity to visit this beautiful church of Hagia Sophia, and with particular affection and love, he turned to the current migrants from Ukraine and gave each of them his blessing.

On 29 March, Ecumenical Patriarch Bartholomew met with the President of the Episcopal Conference of the Roman Catholic Church in Poland and visited the refugee center. On 30 March, in the morning, he returned to the Phanar.

TOAST by His All-Holiness Ecumenical Patriarch Bartholomew during the Luncheon at the Belweder Palace (Monday, March 28, 2022)

It is a special privilege to be invited by Your Excellency to visit your beautiful and historical nation in order to witness first-hand the impressive and inspiring process that you have generously initiated for the sake of receiving and consoling millions of refugees from Ukraine.

You have given faith and hope to numerous people that continue to flee the invasion of their sovereign land by a neighboring aggressor, who has mercilessly pitted brother against brother, Christian against Christian, and citizen against citizen.

We are grateful to you, Your Excellency, for the personal invitation to stand here with you in solidarity and support, along with all your people – starting from the First Lady and incorporating every civil and religious organization, as well as every volunteer individual and benevolent institution. You have – in an unprecedented and unbelievable convergence of charity and care – literally embraced all those who are today standing at your border and knocking on your door.

We have repeatedly stated that we are personally grateful and humbled – indeed, the entire world looks with admiration and appreciation – at the compassion and goodwill of your magnificent and magnanimous nation toward those who were forced to leave the comfort and safety of their homes in Ukraine.

Your Excellency, the people of Poland understand very well what it means to suffer from war. But above and beyond this, the citizens of Poland respect the God-given gift of freedom – freedom of speech, freedom of worship, and freedom of life.

For this reason, without any conditions and without any questions, your nation has opened its borders and its heart to extend patronage to women and children, as well as to the elderly people and to the unaccompanied minors. In so doing – in the middle of this unimaginable and unjustifiable crisis – Poland stands out as a model of decency and philanthropy.

For all these benefits – both known and unknown, both seen and unseen, both solicited and spontaneous – we express our wholehearted gratitude and congratulations.

And we pray – in fact, we would dare to add that we assure you – that God will never turn His face from His children in this land because “you have welcomed the stranger” (as we read in the Letter to the Romans) and “you have loved your neighbor as yourselves” (as we are reminded by Christ Himself in the Gospels).

Your Excellency, we are convinced that the warmth and hospitality that you have bestowed on us today certainly gives us a glimpse into what you have – selflessly and sacrificially – provided to countless people from Ukraine.

And for that we will always be indebted to you and your people.

Thank you and God bless you.