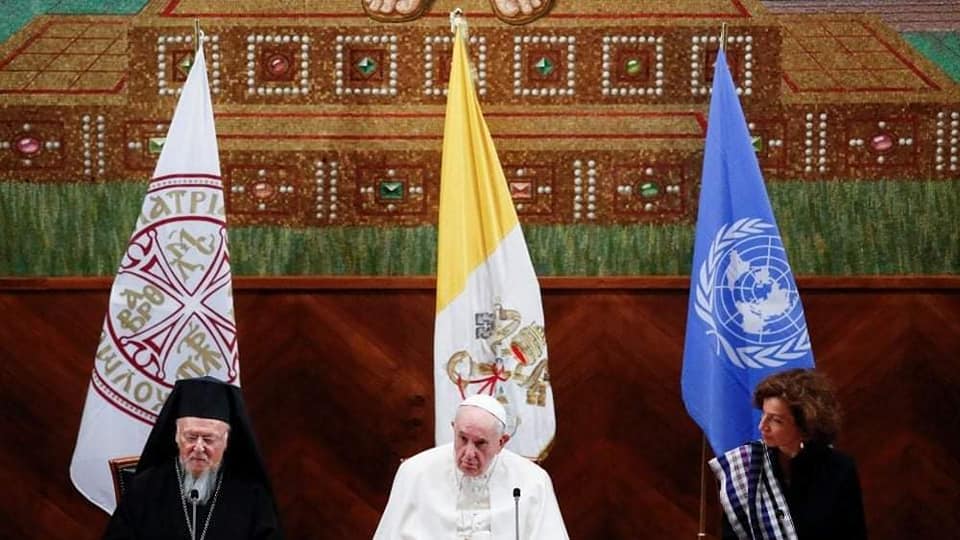 His All-Holiness Ecumenical Patriarch Bartholomew, together with His Holiness Pope Francis, attended on 7 October 2021, at the Pontifical University of Lateran, the founding ceremony of the UNESCO Chair of Ecology and Environment, which bears their name.

The ceremony included addresses of the Director-General of UNESCO, Mrs. Audrey Azoulay, His Eminence Cardinal Angelo De Donatis, Chancellor of the University, Mr. Vincenzo Buonomo, Rectorof the University and at the end the Ecumenical Patriarch and the Pope. The foundation of this UNESCO Chair, as all the speakers pointed out, will contribute to a better knowledge of the issues of the protection of the environment as a gift of God to humanity.

In the afternoon, the Pope and the Ecumenical Patriarch participated in the final event of the International Inter-religious Meeting “Peoples as Brothers, Future Earth. Religions and Cultures in Dialogue” of the Community of Sant’Egidio in the historic site of the Colosseum. The event was attended by representatives of the Orthodox Churches of Russia, Serbia and Romania, as well as other Orthodox Oriental Churches and other Christian and religious communities. The event was also welcomed by Mrs. Angela Merkel, Chancellor of the Federal Republic of Germany.

It is almost a year ago that the President of the Pontifical Lateran University, our dear friend Dr. Vincenzo Buonomo, contacted us with the inspired and inspiring idea of founding a Theological Chair dedicated to the Protection of God’s Creation at this eminent institution, under the joint auspices of our beloved brother in Christ Pope Francis and our Modesty. In collaboration with our personal representative on this sacred project, Archdeacon John Chryssavgis, a specific program of studies was created and the Chair is today being launched with the support of UNESCO as a way of embracing the vision and advancing the mission of our two Sister Churches and their current leaders, while establishing another tangible platform of collaboration between the ancient Sees of Saints Peter and Andrew.

Reflecting the inter-religious and inter-disciplinary approach to the sensitive, while at the same time, urgent challenge of climate change, the academic framework of this Chair includes theological and philosophical dimensions, as well as legal and socio-economic aspects, in order to train and shape students how to respond to the ecological crisis in a collaborative and conscientious manner.

Of course, this Chair did not appear abruptly or unexpectedly. It has emerged and developed as a result of much pioneering and paramount work on the part of our two Churches, which have long demonstrated their commitment to raising awareness on the vital importance of protecting God’s wonderful universe, not only in response to political or economic concerns, but above all in response to the divine mandate to care for the gift of creation, “to serve and preserve the earth,” as God commanded Adam and Eve in the Book of Genesis (chapter 2, verse 15).

The Ecumenical Patriarchate has proclaimed and promoted this message for over three decades now, since 1989, when our venerable predecessor Patriarch Demetrios issued the first annual encyclical to Orthodox Christians throughout the world, thereby also establishing September 1st as a day of prayer for the natural environment. This special commemoration and celebration was subsequently affirmed and embraced by other Christian Churches (including the Roman Catholic Church, the Anglican Communion, and the Lutheran World Federation) and many ecumenical organizations (including the World Council of Churches and the Conference of European Churches). Most prominently, our brother Pope Francis issued his courageous encyclical Laudato Si’ in 2015, which was launched—again for the first time in the history of papal encyclicals, through the generosity of the Pope!—jointly by Peter Cardinal Turkson and our Metropolitan John of Pergamon. And, as you are all aware, only a month ago, together with Pope Francis and Archbishop Justin Welby, we signed a joint statement emphasizing how all of us depend on one another to address any global crisis, such as Covid-19 and climate change. This was, as we declared, “the first time that the three of us felt compelled to address together the urgency of environmental sustainability, its impact on persistent poverty, and the importance of global cooperation.”

But today, we are setting into motion a groundbreaking academic program, which will foster conversation and collaboration, while generating information and education. In 1989, when the first environmental encyclical of the Ecumenical Patriarchate was issues, people were only beginning to become aware of the challenge of climate change and pollution. Yet today, three decades later, unfortunately, politicians and corporations are still reluctant or resistant to pursue policies and practices to stop or curb the problem. This is precisely why we need universities and schools to sow the necessary seeds for motivating the appropriate response and necessary transformation. Education, in all its levels, is a powerful vehicle for addressing the lack of progress in our communities and even in our churches throughout the world.

This is the knowledge and ethos that we should be promoting. And the new Chair of Theology at this esteemed Pontifical University will be at the forefront of the effort to produce thinkers, practitioners and leaders, who are sensitive and attuned to the presence of God in every detail and particle of His creation.

We are grateful for the honor of dedicating this Chair to Pope Francis and our Modesty. And we wish you every blessing and success in your noble commission.